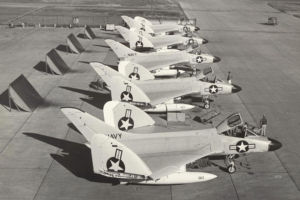 The Douglas Aircraft Company El Segundo Division delivered many early-era jet aircraft to the USAF B-4 flight facilities at LAX. This is where BDI (then known as Lynnco) found their first customer. With the production of the jet-powered F4D-1 Skyray, which was capable of Mach 1+ speeds, the Hangar B-4 ramp at LAX was outfitted with a number of Stanley Lynn’s first jet blast deflector designs capable of withstanding high-power jet engine run-ups. The ramp at Hangar B-4 transformed many times over the years, and was finally demolished in 2004 after reaching the end of its useful life. The site is now the home of Atlantic Aviation LAX.

For specific information on how BDI might meet the requirements of your next project, please